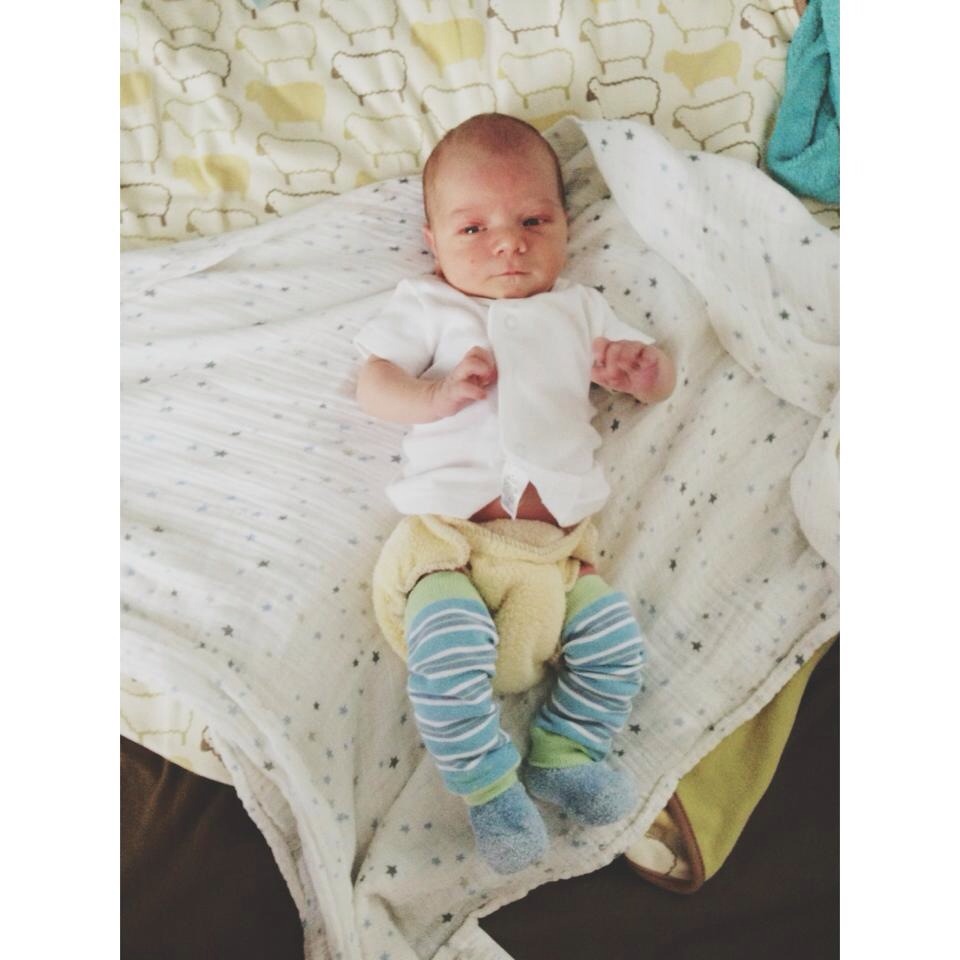 As told by Bergen:

It had been a long, hard pregnancy. That morning I woke up on the early side. I felt awful. And cranky. About as cranky as a woman hours from 40 weeks pregnant in the throws of Early September’s desperate cling to summer’s heat. Let me tell you, that’s pretty cranky. I missed the last step on my way downstairs and flat-footed too hard on the floor. My uterus made it breathtakingly clear that this kind of careless behavior was not appreciated.

I had been enjoying prodromal labor for a few weeks, once even rushing home from an appointment in DC just in case. I had been checking my own cervix every few days so I knew I was well effaced and chilling at a 3 or 4. Everyone was concerned that the birth could move fast. Third babies, man. I texted the midwife: “My uterus is being a bitch. Wanna come over?” It was just after 8 AM. “Sure. We’ll stay for brunch.” was the reply.

Evan had hurt his back just days prior and he had an appointment with the chiropractor — a skilled doc, nice office, lotta kids, I call her Mom. As a goodwill gesture he took Pip (20 mo) with him. Belle (4.5) kept me company as I wandered around the quiet house filling the time between contractions with toast and timers. She stayed close. The midwives arrived. We chatted for a while in the kitchen. There was more toast and some tea. I kept trying to crack jokes but it mostly came out snarky. The contractions were annoying the crap out of me and I wasn’t making any sense. They were manageable and not very painful, but so very distracting.

I called Evan to come home. He didn’t make his appointment. I was glad I asked the midwives to come when I did. Not because things moved precipitously fast after that, but because I very quickly lost track of chronology. I had every intention of calling my best friend to come — and I just…forgot. I was absorbed and utterly internal.

Brunch was unceremoniously cancelled so I waddled upstairs to my tub. My glorious tub. Evan and his dad designed and built our house about a year before. I had some input on the features but my only sticking point was a deep soaking tub. None of this 9″ to the overflow nonsense. I wanted a tub deep enough that my ears would get wet. No jets, bubbles, bells or whistles, just a big water-holder and a hot water heater to match. We use it every single day. I labored there for a while. Maybe an hour. I’m not sure. I could squat deep, deep and hold on to the edge of the tub for support and push my back against the other side, anchored. The metal of the faucet felt cool and smooth on my forehead. I don’t remember anyone with me for a long time. Just me in the tub. Hot and cool.

After a while I was overly hot and needed to stretch my legs. I wandered into our bedroom. The midwives, Shanna and Zellene, my mom, and Evan were there. I went straight to the foot of the bed, which has been my sacred labor zone for all three labors, knees on the floor, chest supported by the bed. The baby sounded good. The contractions hurt — always in my back. I tend to labor in my back, anyway, but this pregnancy I suffered from sciatica and a rib that just wouldn’t stay put. A third pregnancy and a, um, robust 32lb toddler meant my back had hurt this way for months. My mom brought a crock pot full of smooth black basalt stones. She and Evan took turns rubbing the hot rocks, slick and shiny with oil, over my back and hips. It felt so good. The rhythmic and ritualistic massage was the perfect focus. I’d suck my breath in at the start of a wave, the sign for a new hot rock, and together we would ooooooooh and circle our way through. We did that for what felt like years, but was probably just a few hours.

Suddenly my attitude changed. I got…bored? I was tired of working so hard. I was restless, annoyed, the rocks were irritating me. Everyone was irritating me. I felt stuck. I got up and tried a few different positions. Standing? No. Hands on bed? Nope. Leaning on Evan? No. Laying down? Oh, dear God, no. This sucks. I wanted a nap and to be left alone. Finally I settled for a deep lunge back at the foot of the bed. Deep, deeper lunge and then a little tiny pop, maybe felt, maybe imagined. A crossing of a threshold. “I can feel the baby in the birth canal.” I announced and I hoped I was right. I felt stupid, saying that. Birth canal. I waited for someone to correct me; “Let’s just make sure. No, it isn’t time yet.” But it never came. I was the authority here.

I wanted to want to push. That’s the best way I could describe it. I wanted to push this baby out. I tried. But it was like my muscles couldn’t remember what to do, like they couldn’t find traction. Ok. It isn’t time yet. Just be patient. More lunging, one knee up high, then the other. I could feel the pressure moving lower. I kept trying to try to push with every contraction. Nada. Finally I broke down and asked Shanna to check me. Like a good midwife she said only encouraging vagueness, lest her answer influence me one way or another. But, alas, the influence is in the observation and I thought for sure I had made it all up. I was still dialiating. The baby hadn’t moved down. It was all in my head. Shanna would have told me otherwise. Screw this.

I wandered out of the bedroom and figured I’d go pee while I was up. Some angelic soul (probably Zellene) had refilled the tub with fresh water. Steam curled from the surface. It looked scrumptious. I hadn’t planned a water birth. With Pippi’s labor the thought had been unappealing. I assumed I was solidly a land birther and if the baby was still high I might as well get back in for a while. I resumed my deep squat sandwiched between the walls of the tub when suddenly the whole house shook. I looked at Evan. “What was THAT?” “Your water just broke. I could feel it through the tub!” Immediately there was the baby. I panicked. “Shanna, the baby’s coming!” Everyone filled into the bathroom. “The baby’s coming!” I repeated, trying to convey my panic. “Now.” “That’s good.” Someone reassured. Didn’t they understand that there was a baby coming out, NOW?! With the girls I worked so hard to push them out. I didn’t have the self control to sink into the Ring of Fire and let them ease out; I was brute force and impatience. Now, I was simply so startled that all I could think of was keeping the baby in. I wasn’t ready. I even reached down as if to block the exit.

He was born nonetheless, into the water only a handful of eternal minutes after my water broke. I never did push. Felix, though here names don’t come until later, was born healthy and whole at home in the water at 3:28 PM. A boy — well that was something new. I scooped him up from between my legs with only a little untangling. We sat in the water. We nursed a bit. We said “Hi.” Then it was the long walk to the bed for the placenta. We didn’t make it. The midwives caught most of it, but I’m afraid that pile of books will never, ever be the same again. 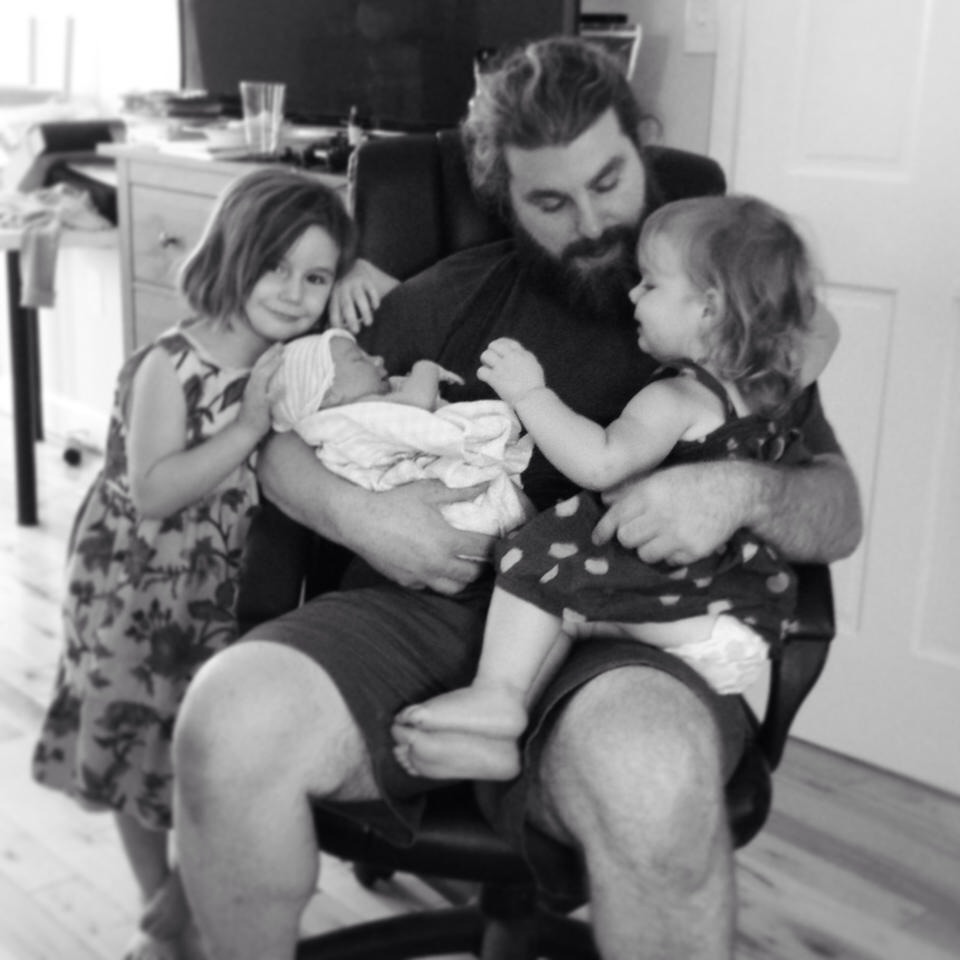 Everything was going well. The girls came home from Grandma’s and Belle cut the cord. We admired the placenta.

And now we are five.

Two hours after birth I started to bleed again. More and more. A trip to the bathroom resulted in a scene typical of a sitcom, the kind I always assumed was hyperbole, where everything turned gray and wavy and sounds became very distant, though only for a moment. The bleeding wouldn’t stop despite our collective bag of tricks, so we called it in.

The ambulance arrived just in time to worry my friends and neighbors. My sister herded the girls upstairs to the attic to play and they were never the wiser. The EMTs carried me down strapped into their stretcher-chair. In all honesty, I wouldn’t have made it down gracefully on my own, but it was still mortifying. Said a cordial Hello from my lofty position to my neighbor who had come by with congratulations (so awkward).

They sat the chair in front of the ambulance and waited. “Think you could climb into the ambulance?” “Sure.” I said. They waited. “But you’ll have to unstrap me first…” “Oh yeah. Sorry. Just a test!” “Did I pass? Can I go back upstairs to bed?” At least my snark remained unaffected. I didn’t want to go to the hospital, I didn’t feel that bad, but I was still bleeding. It was the responsible thing to do, though — go to the hospital before we tipped the scales from concerning to troublesome.

We spent a lot of time in triage, waiting. We hammed it up with the nurses. We waited. The bleeding slowed. When we finally went upstairs they hung a bag of Pit. It sucked, but it worked. Or, more likely, given just how very, very long we waited in triage, and that I had almost stopped bleeding before we were sent upstairs — the extra time gave my body a chance to catch up. I checked out physically and my blood work came back surprisingly reassuring. By 10 PM I was released and we headed for home. The trip to the hospital was a good decision, even if it wasn’t how I wanted to spend my evening. My gratitude to my midwives for making sure I was well cared for at all stages.

After pains tend to be worse with each baby, so by number three I had it coming, I knew it. But these were killer. I wasn’t bleeding much any more. My uterus was a nice hard grapefruit. No fever. But the cramps would knock me down and never really went away. On day three my mom came back to give Evan the adjustment he had missed. I got one, too, and suddenly, without a baby in the way, something in my back released that had been locked up for a very long time. I think a nerve, pinched for much of the third trimester, kept me from being able to push. We never did pin point the cause of the hemorrhage, though my diet-controlled anemic tendency was the most likely culprit.

We’re so happy to have you, little Flick. You make our family so joyful!