After the late-term loss of our 2nd pregnancy last year, my dreams of any “normal” future pregnancy experience were shattered. I knew even if we got pregnant again, there would not be another baby shower nor blissfully ignorant jokes or conversations about what to expect.

When we found out I was pregnant for the 3rd time, indeed it was a different journey. There was more crying, fewer announcements, more gratitude, and fewer purchases made ahead-of-time. Honoring our stillborn daughter during this pregnancy was important to me. I discovered that the people who weren’t able to be with us through the heartache of a stillbirth were not the people I wanted to keep close in this new joy; I knew they wouldn’t be sensitive to the impossible mix of emotions I was experiencing. I was mourning one baby while (hopefully) preparing for another child – a child who would not have existed had our previous baby lived.

The well-intentioned yet hurtful comments we received about how we should be feeling caused us to prune many long-held relationships. “It’s time to move on. Focus on the positives.” “You’re just being cynical; this one is going to be fine.” It was devastating for my overly-sensitive heart. In our suffering, though, we also made new friends who knew grief, who understood the volatility of plans, and were not afraid to talk about this life in terms of what it is…unpredictable.

“No one really knows what is going to happen;
no one can predict the future.” – Ecclesiastes 10:14

My heart felt safe around a precious few women who weren’t afraid of my tears, and I was so relieved when three of them agreed to serve us for a planned homebirth.

My first two labors had each progressed quickly, so when I was full-term and had my first several, regular, painful contractions for an hour, our team decided to come over. They were all coming from a distance and a concern had been that if we didn’t call soon enough, we would have an unattended birth.

It hadn’t really occurred to me that the opposite could happen. Sure enough, by the time our team arrived in the wee hours past midnight, my contractions had become completely irregular. Our midwife made the assessment that it was time for everyone to get some rest while we still could. She and her assistant found empty beds upstairs.

Unfortunately, I was far too energized to sleep; I also felt pressure to keep trying to get labor to progress since our birth team came from so far away. Our doula stayed awake a bit longer with me and my husband downstairs. We ended up watching World Cup soccer re-runs until I finally conceded to sleep. 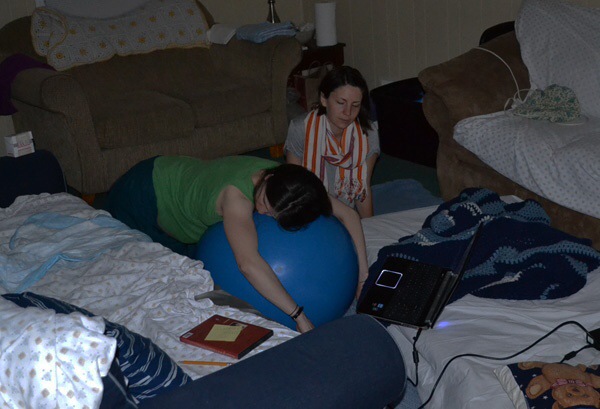 As the sun was rising, I woke up to a contraction that broke my water. My husband and our doula woke up, too, and we decided to go outside. The temperature was perfect and the first of the birds were singing their morning songs. I supposed an outside stroll might be leisurely while labor ramped up, but I immediately needed support for every contraction and I didn’t have much time between them. 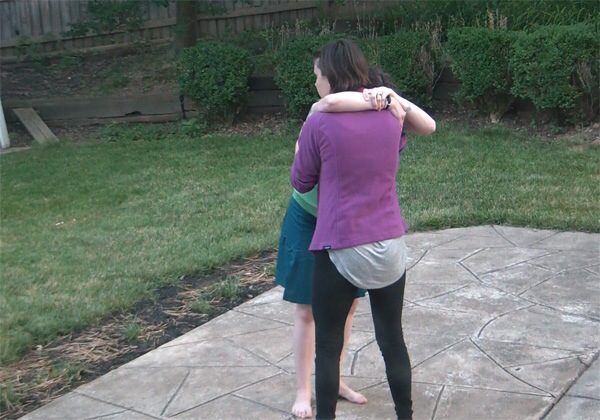 We quickly came back inside when I had the immediate and unfortunate urge to evacuate everything from my body. The sound of my vomiting alerted the ladies upstairs that I was progressing. They came downstairs and checked the baby’s heart rate in between my urgent trips to the bathroom.

Someone suggested that I could just stay on the toilet for a while, facing backwards. That sounded great, so I conveniently picked the smallest bathroom in the house, the foyer half-bath. (It’s also directly under our toddler’s bedroom upstairs, but he amazingly slept through everything.) Our precious doula stood behind me and I held her hands with each all-consuming contraction as I closed my eyes and visualized the baby descending.

I was surprised when my body started to push only about 30 minutes into my toilet time. I made a panicked announcement to our midwife that I was pushing. She made the sweetest suggestion that I come off the toilet, but I couldn’t fathom how I would move.
Fortunately, after one more pushing contraction, I found a brief moment of motivation to flop off the toilet onto my hands and knees on the wooden floor in the foyer hall. The 3ft wide hallway wasn’t much of an improvement in location, but this would have to do because the head was delivered with the next contraction. In my mind, there was calm in the moment that followed as I patiently waited for the next contraction that would deliver the shoulders. I appreciated the fact that I had been sleeping just over an hour ago, and now I was having a baby.

Our midwife guided the baby onto the towels underneath me, but I couldn’t make myself look. Now, I was re-living the birth of our dead daughter’s body a year ago; I remembered her paleness, lack of muscle tone, and the silence of that delivery room. 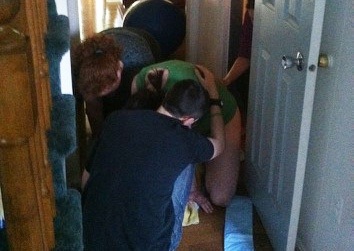 As I lingered, hovered over my child who I couldn’t touch, feeling like a failure as a mother, this babe reached out from under the towels and their fingers wrapped around my thumb. I sobbed while I soaked up God’s forgiveness and love in my sorrow and weakness. It was a healing, quiet, prayerful experience allowing this to be the birth that I dared to hope it would be.

My husband cut the cord and revealed the gender. Oh, how my heart broke as I simultaneously rejoiced to know I had another daughter. Ivy is the name we would choose. Tears flowed readily.
I still ache for heaven (and that’s a good thing), but I surely will be grateful for the days God gives me to hold our rainbow baby down here. 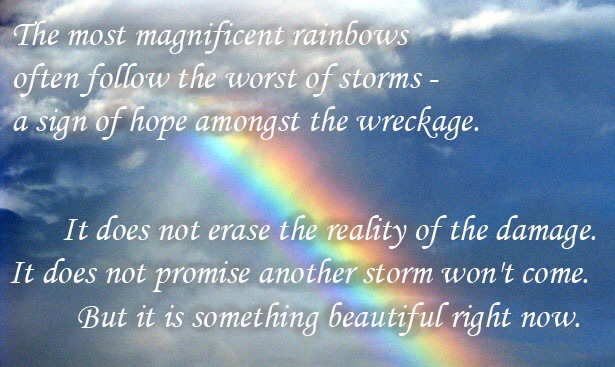 Certainly, she is something beautiful right now.