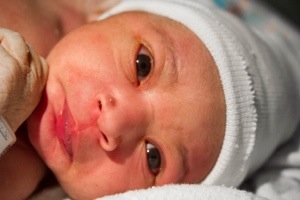 As told by Ashley:

I was frustrated and exhausted. At estimated 40 weeks, I had an appointment with Liz, my midwife, and she checked me for progress, to put my mind at ease and she found that I hadn’t dilated at all. I went home defeated, still having contractions.

Every day, I went for walks. I did yoga. I climbed the stairs, up and down. I ate spicy foods. I did squats in the grocery store. I got chiropractic adjustments. I had acupuncture. I tried everything within my power to get this sweet, stubborn little boy to come earthside.

At almost 42 weeks, I had another appointment. I had been up through most of the night before with contractions every 4-5 minutes, and had all but given up when they stopped sometime in the early morning. My appointment was on March 7, 2013, my cousin Joshua’s birthday. I had made a joke to him that we were going to try to have a birthday for his birthday when I left for my appointment.

At the appointment, Liz and I discussed home induction methods, because my labor had not yet progressed. We discussed castor oil and black/blue cohosh, and decided that if I made it to Monday with no sign of a baby, I would go in for an ultrasound to make sure that everything was okay with my little guy. Then, we would start with castor oil. I was dreading it, but I wanted so badly for my son to be born after all of the nights of anxiously waiting for him.

Before I left the office, Liz suggested checking my cervix for progress again to make sure that I would be ready for induction. If my cervix was not effaced, it would be pointless for me to try and induce labor. With my aunt, Yvette, at my side, I was prepared to hear the same thing I had heard almost 2 weeks prior. Instead, I heard Liz gasp audibly. Then, she started to laugh. Alarmed, I asked her “Why are you laughing? You don’t just laugh and not tell me what is going on!” She looked at me and said, “You’re going to have a baby, soon! You’re 5 to 6 centimeters dilated!” Incredulous, Yvette asked her how often someone comes into their office not knowing that they are in active labor. Liz’s response was “First time mothers? Never.”

That night, the contractions stopped again.
The following day, a Friday, I asked my cousins Joshua and Kaila to accompany me walking in Shepherdstown. We walked for over an hour. Meanwhile, I felt my contractions pick up again. I didn’t mention them to anyone and tracked them myself. I did not want to get my hopes up only to be disappointed again. At this point, it had been more than 24 hours since my appointment.

We arrived home after 7PM and I discretely informed Yvette, that she should call the family members over who wanted to be there for the birth. My contractions had gotten to about 7 minutes apart but I just knew this was it.

My cousin Laura arrived about an hour later and we set up in the living room. Kaila, Laura, Yvette, and I put on some of our favorite funny television show episodes and I milled about my living room, occasionally using my birth ball to lean on, or getting on all fours to rock my hips. My contractions got progressively stronger and continued to get closer together. They were never consistent, but they were closer together. Around 11PM or midnight, I got in the big Jacuzzi tub in our master bathroom. It was exactly what I needed. Time passed quickly in the tub and I had the ladies bringing me cold wet cloths and drinks. Around 3AM, Yvette called Liz and our birth assistant Shawna. Shawna and Liz arrived, finally, around 4AM. I was incredibly relieved to see them, which Laura caught in a beautiful photo. 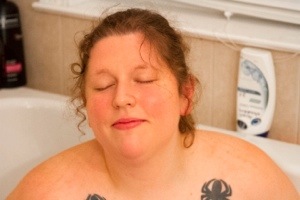 When Liz arrived, she asked to listen to Julian’s heartbeat. I stayed in the tub and she used a Doppler device on my belly. When it took her longer than 30 seconds to find it, I started to worry. Around a minute into it, she asked me to get out of the tub. She could not find his heartbeat.

We transitioned into the bedroom and I laid on the bed in various positions and she could briefly find his heartbeat but it was quiet and intermittent. At that point, Liz looked at me and said we were going to the hospital. There was no discussion and we all got dressed and ready and hopped in our vehicles.

We arrived at the hospital around 5AM. At that point, I was around 7-8 centimeters dilated. The nurse hooked me up to fetal monitors and started my IV. I vaguely remember threatening to have my cousin Laura insert the IV if they blew another one of my veins.

The hours passed slowly. I felt defeated. My Liz, Shawna, Yvette, and Laura were allowed to stay in my room and they were wonderful supports to have. I was exhausted beyond measure and nodded out between contractions. My doctor, at some point, mentioned that if Julian was not born by 6PM, I would be having a c-section. I was desperate and wondered aloud to the women with me if I should just give up and take the c-section. My back labor was extremely painful and every few minutes, the nurse was making me move positions because Julian’s heart rate would drop.

Around 4PM, Liz implored me to take Pitocin. She asked Yvette to have a talk with me. And, though it was something I had rallied against in my birth plan, I finally broke down and agreed to it. At this point, I had been 9 and ¾ centimeters dilated since around noon. I agreed on one condition, that I was allowed to reevaluate in half an hour and I had the right to have them stop the Pitocin.

I was on the Pitocin for about an hour and a half and I went somewhere else, mentally. I felt so different than I had. My contractions centralized and I no longer had back labor. I was, though, too tired to talk.
After the hour and a half, Liz told me that I should get an epidural. She knew it was not a part of my birth plan but she also knew that I needed rest. And, if I ended up needing a c-section, I would already have the catheter in for a spinal block. I felt so frustrated with my body. This was not how I had imagined my son’s birth.

The doctor told my birth team to take some time to get dinner and rest up as it was bound to be a while before the epidural was through. An anesthesiologist arrived and prepped my back for the epidural, as my nurse took my hands and had me curl around a pillow. Just before they started the epidural, I had a contraction. I looked up at the nurse and she sensed my panic. She asked me if I was okay and I said “I’m pushing. I’m pushing and I can’t stop.” She asked me to try my hardest not to move because at that point they had started inserting the epidural and if it came out they would have to start over.

In the next 15 or so minutes, my birth team was back and doctors and nurses came in the room in a flurry to set up for delivery. I was prepped and my birth team members assembled around me. I remember asking Yvette to put her hand on my belly because the epidural had numbed me so much that I didn’t know when I was having a contraction. Julian’s head crowned quickly and then all of a sudden, a nurse was on top of me pressing down on my pelvis. In a quick movement, Julian was out and on my chest briefly before they whisked him away. He was purple and floppy. I heard him cry briefly and then he stopped. I laughed with joy just knowing that he was out. Something in me knew that he would be okay.

I found out that, later, that Julian had many more obstacles than expected. He had passed meconium in utero about a week prior and his skin was stained green in places because of it. He had lost weight because he was “overbaked” and had hanging skin on his belly and upper arms. He had aspirated at birth and had trouble breathing so they had to give him breathing assistance and suction his airway. His head had been flexed and had a pretty impressive cone shape. There was also very little amniotic fluid left in his sac. My membranes had never ruptured and when they had tried to rupture them in the hospital, no fluid had come out. He also had a shoulder dystocia. The nurse had climbed on top of me to try to open up my pelvis more, to turn Julian and pull him out. Julian was a little dehydrated, but he was healthy.

Julian Ellwood McElwee was born on March 9th at 5:53PM, just 7 minutes shy of his deadline. He was 8 lbs, 4.2 oz and 20 inches long.
My favorite moment was captured in a photo. The relief on everyone’s faces as Julian started to cry was evident to everyone. 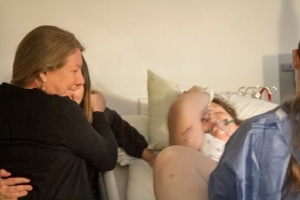 It was important to me to share all of the details of Julian’s birth. It taught me one beautiful thing, if nothing else. I cannot control the Universe. His birth may not have been what I had wanted. But his birth empowered me in a way I had been told it would, but that I just didn’t understand until he was here. 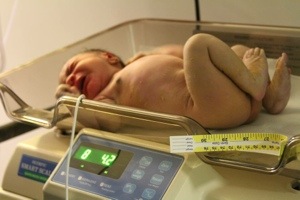