As told by Elizabeth: Mira Klaire was born April 6, 2013. But her birth story began many years before. My husband and I married July 4, 2006 and knew immediately we wanted to be parents. We didn’t realize we were entering the darkest time of our lives… we then began what would be a 7 year journey of infertility, recurrent pregnancy loss, failed infertility treatments, being told we would never have biological children, and two failed adoptions… along with the tragic unexpected death of my mother. By the summer of 2012, we were battered and completely worn down; totally defeated. Two days after we spent the evening with our social worker to renew our adoption homestudy, we got the surprise of our lives. I was pregnant.

Saying we were shocked would be an understatement. After seeing the baby was healthy we started to get excited. Over the next few months we had bleeding scare after bleeding scare. Then at 19wks I was diagnosed with Incompetent Cervix and rushed for emergency surgery. My cervix was basically non-existent and beginning to dilate. The doctor actually had to put her bag of waters that was bulging back into my uterus without breaking it, before he could stitch my cervix closed. The success rate with our circumstances was less then 10%. We prepared before the surgery for our baby to be born and die. The surgery took 45 minutes (normal is about 10) and the Dr came into recovery afterwards with tears in his eyes and said “I don’t know why that worked! But it did!” We were terrified. I was on strict at home bed rest… lying down with the end of the bed elevated. No stairs or even sitting up. I laid in that bed terrified from 19-35wks. My cervix was a mess the entire time but somehow the stitch worked! It was removed at 36wks and we assumed I’d go right into labor. But I didn’t!
The weeks continued to pass… at 39 weeks I went to a routine OB appt and it was discovered she had flipped breech. The dr absolutely terrified us and told us at that point it was less then 3% she’d flip back head down. We had to schedule a cesarean or she could die. Yes. That’s exactly what they said. So obviously, we scheduled it, for 3 days later. I spent 3 days crying… everything about it felt completely wrong!! I could NOT accept that March 29 would be her birthday or that she would be born via cesarean. None of it felt right in anyway. We showed up to the hospital for our cesarean and I was shaking and crying through all the pre-op. I couldn’t talk to anyone. I was a mess. Finally the dr came in and sat with me and I sobbed and just said “this feels so wrong. It just isn’t supposed to be this way” and he was so kind. He tried to reassure me and then took my hand and patted it and said “you know what? This baby is perfectly healthy! We are ONLY doing this because she’s breech. So let’s make sure before we go to the OR” he brought in an ultrasound machine and began to scan my belly and he started laughing! He looked at me and said “this feels so wrong to you, because it is! Your baby is head down. You are not having surgery today. Nurse? Take the IVs out, she’s going home!” I was gasping and yelling and crying! I asked him if I could hug him. I could NOT believe it!!! I jumped up outnof that bed and got dressed so fast LOL I took my 39wk pregnant self and was running down the hall out of that place. I remember my husband laughing and tell me to wait up! LOL
I spent the next 8 days high on life and so happy! At 40wks 3 days I had some acupuncture to help encourage labor, 12hours later consisted contractions began. After 12 hours of laboring at home I felt like I was in active labor so we headed to the hospital. Upon arriving it was discovered I was 2cm dilated… it would be a while yet. I felt a bit disappointed but that was quickly overruled by overpowering contractions. I couldn’t be disappointed, I had to focus. Over the next 22 hrs we danced through labor, cried, screamed, dismissed a rude nurse (who told me I needed to get dressed because she was uncomfortable! Ugh!) had labor stall, got an epidural, started pitocin, felt completely defeated… had a dr check me and “accidentally” break my water (i.e., break it without my consent after I’d said no) which lead to hours of heart rate decels and nurses rushing in panicked constantly scaring me… I was spent. And exhausted. I just wanted to be done. I remember talking to myself and telling myself to focus; one way or another we were having a baby TODAY! It was the craziest mental place I’d ever been. 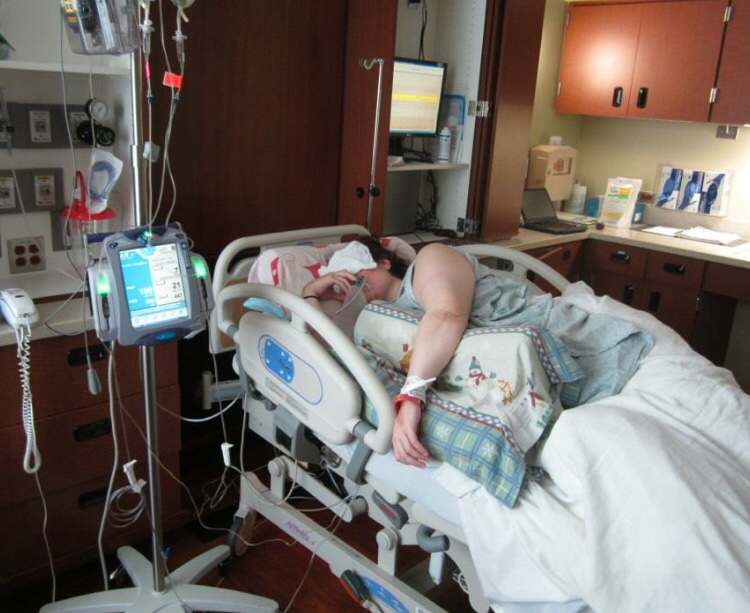 (29hrs into labor. About 3 hours before her birth)
At one point the dr came in and said he was concerned about the baby and he could only give me one more hour before we’d have to go for a cesarean. I hastily agreed. I didn’t want surgery but I also didn’t want the awfulness to continue… I was beginning to feel as if I was loosing my mind. Before long I began to shake uncontrollably; mind you the epidural I was given never worked correctly; my legs were totally numb but my abdomen and vaginal area was only partially and by the time I began pushing the numbness was totally gone except for my legs. Suddenly the dr came back in… I was pissed! My hour wasnt up! He said I could have an hour! I began getting upset… he smiled and said he was not taking my hour from me; he just had a hunch and wanted to check me. I agreed, and he happily told me I was fully dilated and ready to go. The room was a buzz getting ready for delivery and all I could think was “OMG. I can’t do this. I’m too tired.” I hadn’t eaten anything in nearly 24hrs. I was so weak.
I actually told the doctor I didn’t think I could push. And he patted my hand and said “I know your tired but just wait for the urge… once that urge to push comes you’ll find the strength” I was sure he was nuts. But sure enough surge after surge and I found myself pushing… I fought and tried to avoid it every contraction but every time it took over and I had to keep going… a nurse and my husband were holding each of my numb legs and I pushed and pushed. For an hour! Before the dr came and told me if I didn’t get her out soon he’d have to get the vacuum… hearing that set some kind of fire off in me. I didn’t want my baby pulled out. That scared me! I found power I never knew I had and pushed with all I had. I felt her head pop out… I breathed as they unwrapped the cord from her neck and then pushed again and felt her little body slide out of me. It was incredible! I sobbed and sobbed. I couldn’t stop. Her cord was short so she was on my belly. She pooped everywhere as soon as she was born. I was touching her and crying and wiping her poo all over my face lol it was the biggest rush I’ve ever felt in my life. 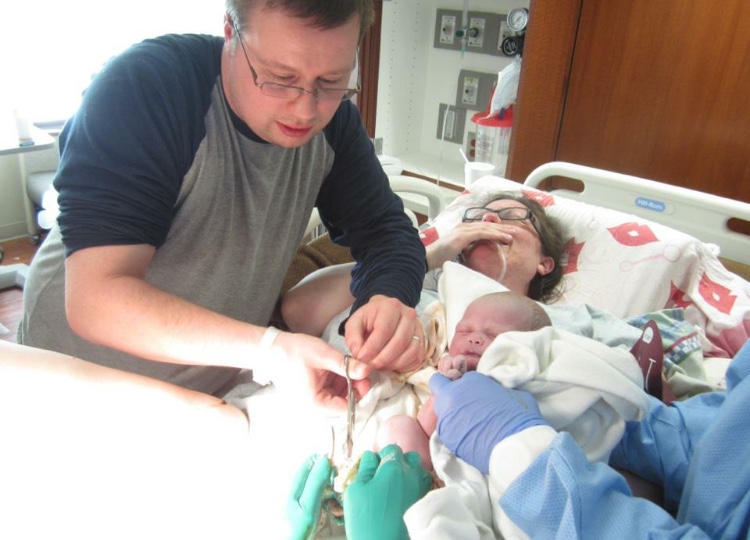 (Daddy cutting the cord)
After her cord was cut they took her to the other side of the room. They were wiping her down and weighing and measuring her. And I still hadn’t seen her. I tore badly and the dr was busy stitching me back together. She was crying for me and I was in so much pain. I kept asking for her and kept being dismissed… Her daddy tried to pick her up at one point and was told no. it was the worst feeling, I’ve ever had in my life. Finally after 40 minutes of listening to her cry, they brought her to me when I started getting loud and demanding they stop everything and give her to me. She stopped crying as soon as her head was pulled in to my chest. She was home. And I was home with her finally in my arms. And I had never felt such an incredible love before in my life. She had her first and second nursing session the following hour and it was pure bliss. A few hours after her birth I texted my friend and the text simply said “OMG! I had a baby! Out of my vagina!!!!” Even though so many things went not as we expected, and many of our wishes were dismissed and disrespected, I had my baby. After all the darkness and rain; our rainbow was in our arms! And our lives would never be the same.
Mira Klaire Joy
4/6/13
6.4lbs 19.5inches long. 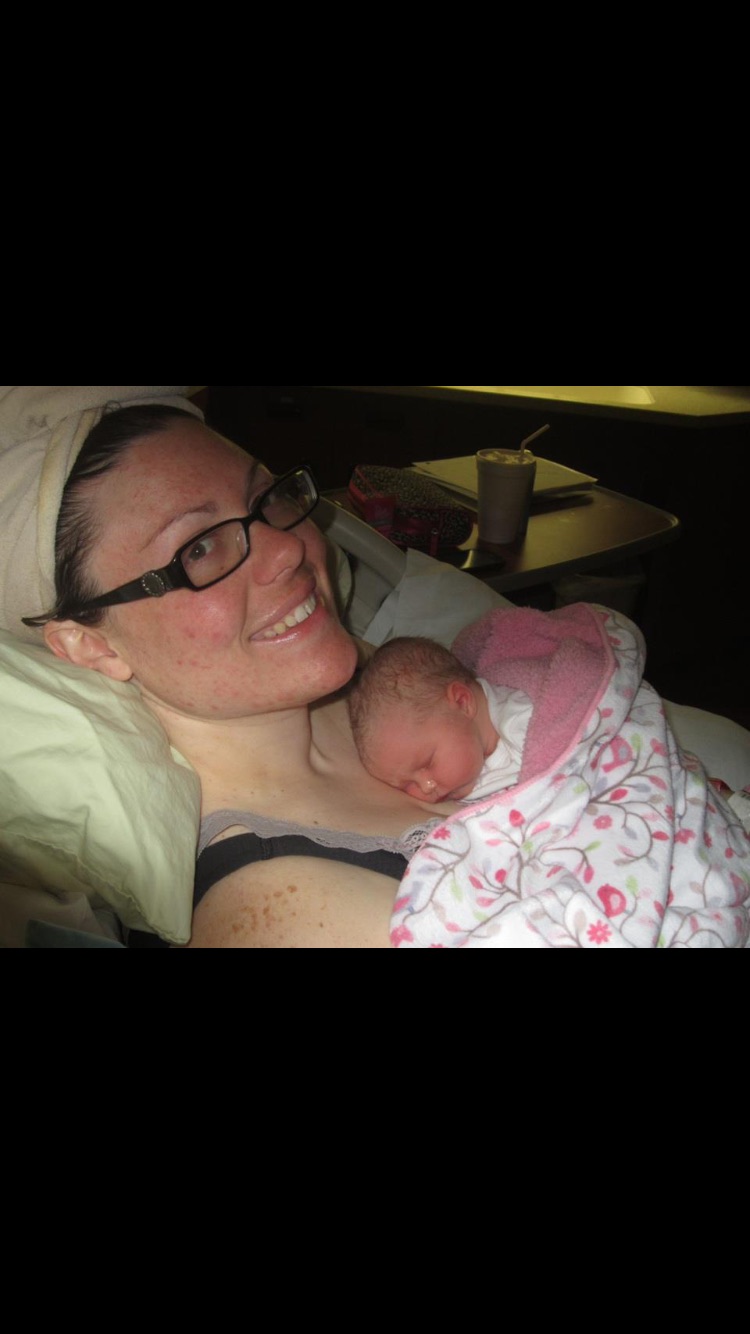