My pregnancy was very healthy and progressed normally.  I was nervous as I had a previous miscarriage, and all the testing and stressful atmosphere of the clinic always rushing me didn’t help. I really needed reassurance, but didn’t really get it, at my first appointment at about 6 weeks they gave me a paper that had some basic guidelines about diet and a list of medicines to take or not to take, but that was it.

I needed to know more, I did a lot of reading and decided we needed childbirth education. Nathen and I took the Bradley Method 12 week class. It taught us all about nutrition, relaxation exercises, normal labor progression and basic coping techniques.  It was very helpful and gave us more confidence. I kept my full time job and worked right up to my due date.

At 41+1 (May 18th) I went to the hospital for an ultrasound and non-stress test at 4pm. They said the fluid was low so they would have to keep me in and induce me. I was admitted and taken up to the maternity ward. I was very upset that I hadn’t gone into labor naturally and I knew that being induced would be more painful, so I felt like all the preparation I had done was worthless. Nathen helped me know that he was with me and what mattered was our baby, and we would still be able to use the coping techniques from our class.

I was admitted and the midwife on duty came and talked to us. She gave me the option of Pitocin or Cytotec. I had heard all the problems with Pitocin induction, but hadn’t heard anything about Cytotec, so I asked her what it would do. She said it would get me started and give me contractions (she didn’t tell me that they would be incredibly painful and that women have died as a result of Cytotec induction, or that it is not even FDA approved for pregnant women, which I have since learned). So I said ok. She checked my cervix (my first time) and it really hurt me – on discharge she mentioned that she had stretched my cervix, without my permission. I will never forget what she said “if you can’t handle a cervix check then you will NEVER be able to give birth without any pain medication.” I was only 1 cm dilated. About an hour after she gave it to me I started having some very strong and painful contractions. I was on the monitor so couldn’t get up. A very grumpy nurse kept coming in to check the machine, but she didn’t pay any attention to us. I asked her if I could get up and walk around but she just said I had to be on the monitor a bit longer and just acted like I was being a baby about being in pain. The nurse and midwife both dismissed my birth plan and said that plans like that were unrealistic for a first birth. This made me feel even worse about the whole thing and I just wanted to go home.

My progress was very slow and the contractions were very painful. They wouldn’t let me get up apart from to use the bathroom so I was stuck in bed most of the time, they did let me labor in the bathtub for a while but I didn’t really like it. I tried to stay in there for a while as that meant I wasn’t in bed. At about 2am I was still only about 3.5cm and they convinced me that to have the energy to make it through without a C-section I would need some Stadol so that I could get a break from the contractions for a while and sleep, I was exhausted. I had the Stadol and slept for a couple of hours, I remember suddenly being aware of the painful contractions coming again, but I was so drugged and out-of-it that I couldn’t really move. When I woke up Nathen was sleeping on the couch, but I couldn’t call him. Eventually I got his attention and he came to help me breathe through the pain, we called the nurses and a new Doctor came in, Dr. Lessard. She checked me and I was 5cm, she broke my water but said that if it didn’t pick up within a couple of hours, I would be going to surgery. This was about 7am.

After this my dilation did continue and the contractions started getting much longer and more painful. Courtney the new midwife and Nurse Betsy were with me and they were amazing, coaching me and letting me change positions. As it turned out, Naomi was posterior and they were trying to get her to turn around, but the contractions were so strong that she didn’t have chance. I alternated from being on hands and knees and on the ball. My transition was so intense I didn’t think I could take any more. When I had to push I had to wait while she checked me and I thought I would die, but pushing felt better, like I was actually getting somewhere.

I was told that I pushed for 90 minutes, but it felt way longer than that. I ended up squatting with my feet on each side of the squat bar with a sheet around it to hold on to (I was too short to use it normally) to move her down, then I pushed her out on my side. I had a third degree tear. The OB surgeon had to come back in to stitch me up.

I was allowed to hold her, but I was flat on my back being stitched so all I could do was hold her on my chest. It was longer than an hour before I was able to start breastfeeding and I had a lot of difficulty getting her to latch on. They did let me hold her for a while before they weighed her (in the same room so I could see) but I didn’t get to feed her until my tear was fixed. 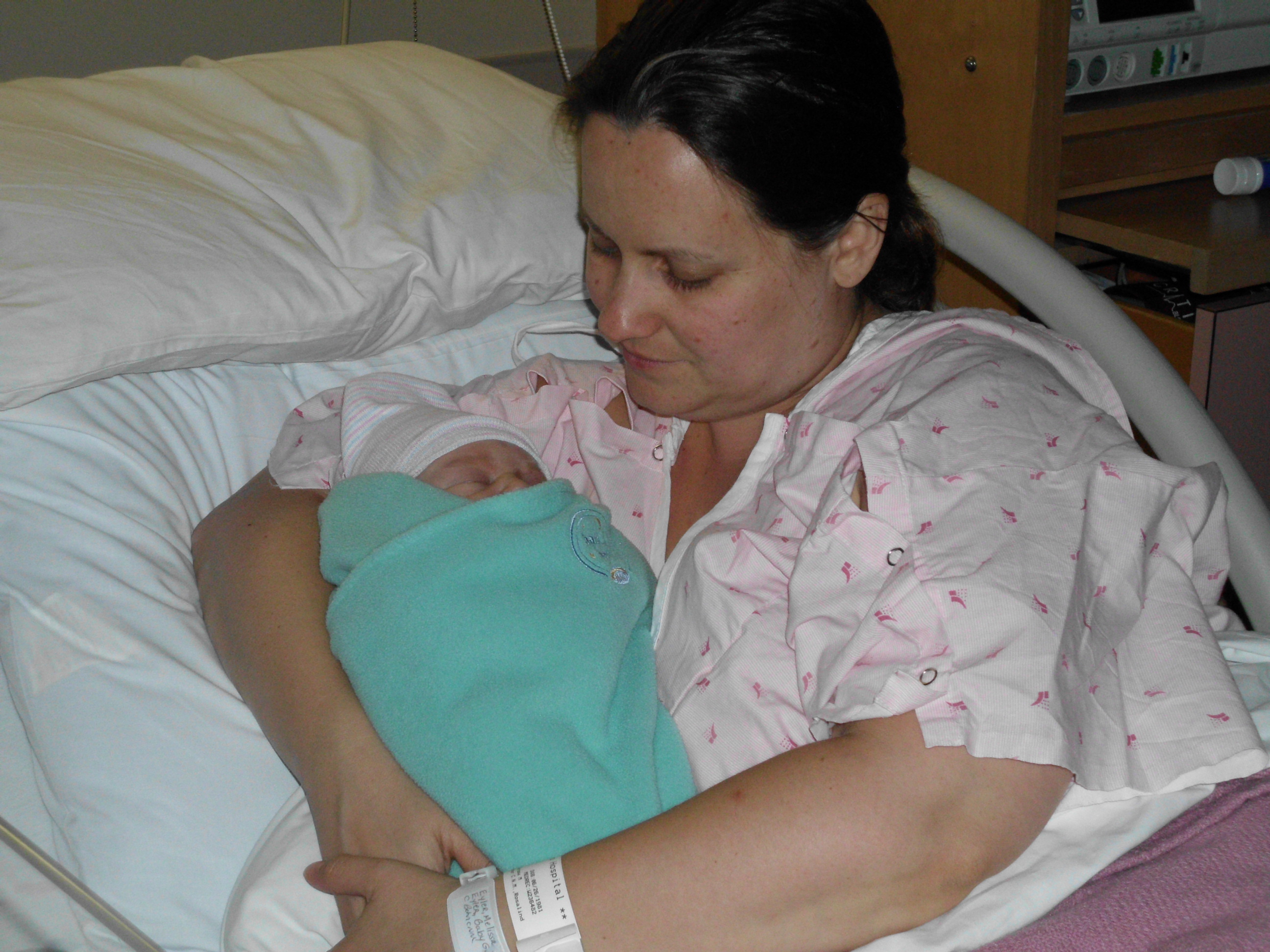 After the birth all the nurses were very nice, I had a lot of trouble getting her to feed (it turned out later that she had a tongue tie) and lots of nurses helped me. Nathen was great and did everything he could to help and bond with Naomi. 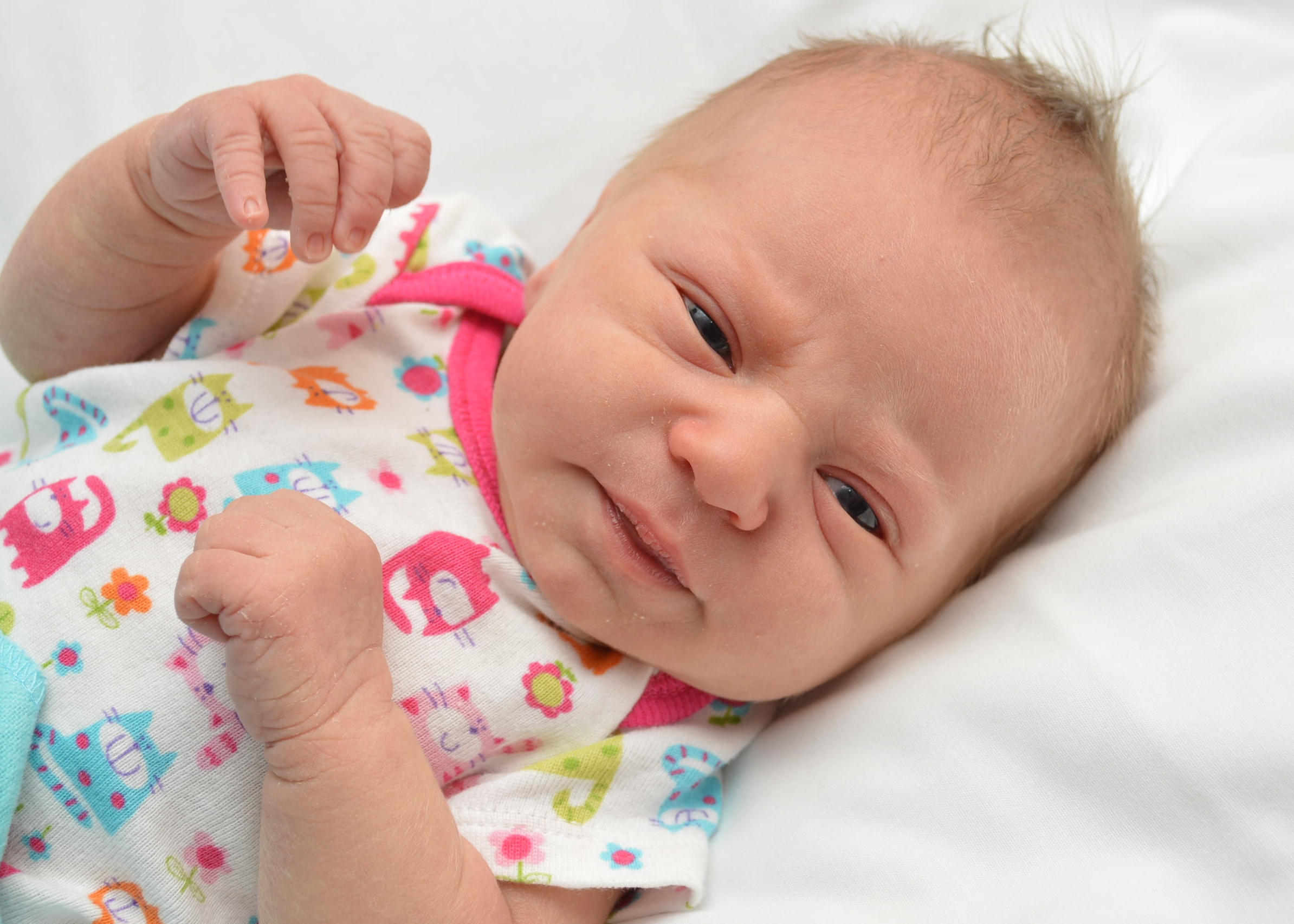 I was very tired and sore from the stitches/hemorrhoids. Nathen was very helpful and supportive, but he could only stay for a week. I really needed help around the house after that. His parents came over most days, but only wanted to hold her. At least I could get a shower and sitz bath in peace. I needed more breastfeeding help and general reassurance. My parents were great, they came to visit when she was almost a month old, but they could only stay for 3 weeks. 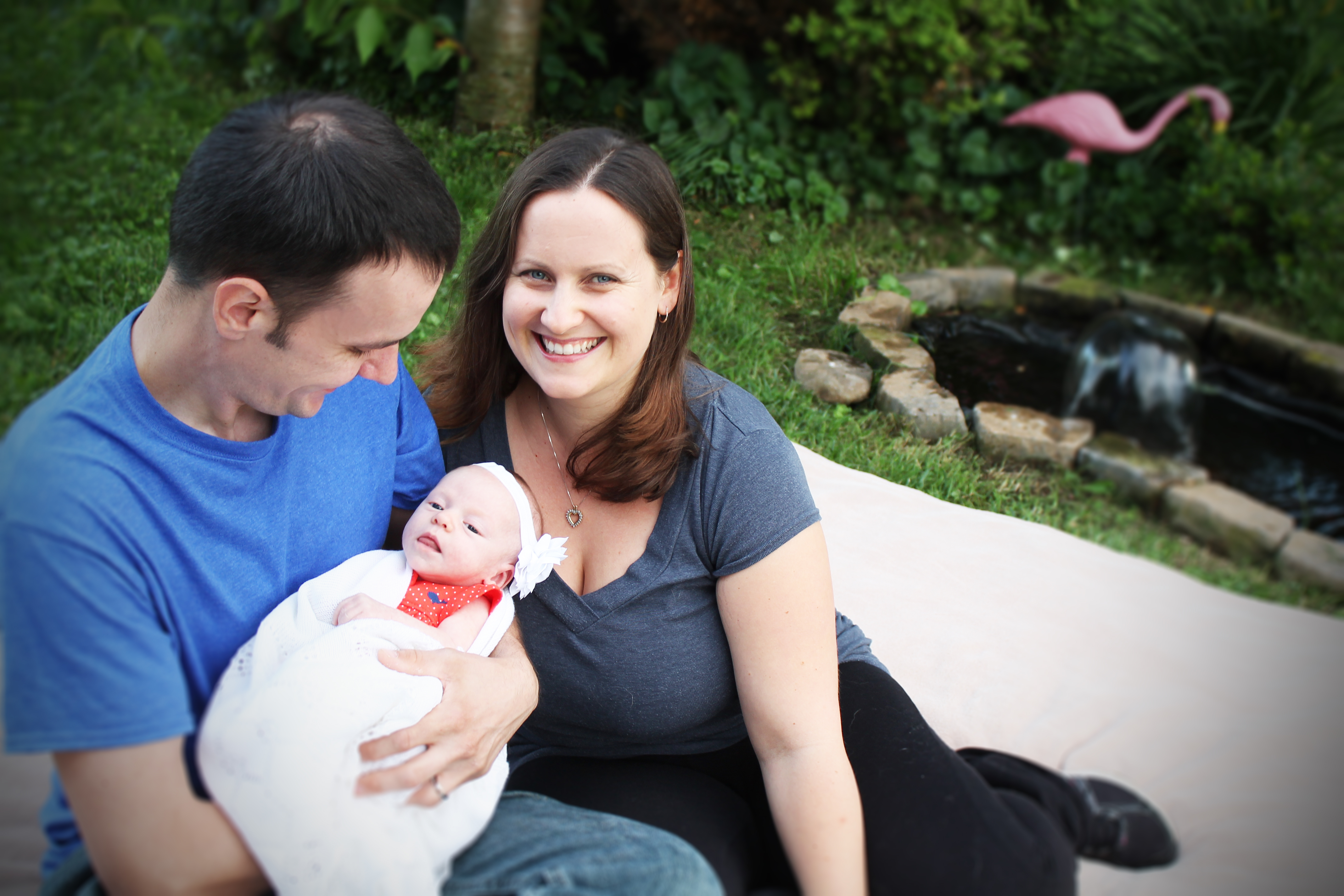 Breastfeeding was very hard initially, I couldn’t get her to latch very well and struggled with sore nipples and thrush. I ended up getting Marah my local La Leche leader to come and see us (she is an IBCLC), she said Naomi had a posterior tie that needed revision. I then took her to the pediatrician who referred me to the ENT specialist. They snipped her lip tie but said the tongue was ok. Issues persisted and Marah said I still should see the pediatric dentist. I did and he fixed it. But not until almost 4 months. Then breastfeeding got a lot easier and all my problems went away, but I suffered with a low supply and had to supplement with formula for a while. Now I am still nursing her at 33 months, I also nursed her through another pregnancy and am now nursing both sisters.