As told by Amii:
New Year’s Day is inventory day. All day, on my feet. 25 weeks 5 days into a very complicated pregnancy due to a sub-chorionic hemorrhage with multiple bleeds. I thought we lost this baby more than once, and had so many bleeding episodes that I stopped going to the ER, and instead had my midwife check for a heartbeat the on the days following a large bleed. This birth was to be my 2nd HBAC, and at my 21 week ultrasound my SCH was showing to be continually shrinking (which is good). Studies have shown correlation but not causation between SCH and premature birth.

At 25 weeks I was already well familiar with gastrointestinal disturbances during this pregnancy, so when intense gas and indigestion hit after I ate a hummus wrap around 3 pm, I thought nothing of if. This intense gas continued throughout the evening, even dampening my hunger at dinner time. While putting away laundry around 8 my every present braxton hicks kicked in. I was already having some good ones this early on, but being baby #3 I knew they got more intense with each pregnancy. The first sign that something wasn’t right was when I crouched down to pick up some laundry during a contraction, it felt…good. As in the contraction discomfort was replaced by pressure, and suddenly squatting was all I wanted to do. Not your typical BH reaction, but I shrugged it off, with all the craziness we had already been through, this was not a big deal.

I settled into bed to put my co-sleeping 2 year old to sleep. I noticed the contractions picking up in quantity and quality, and decided to be silly and time them. What I found was they were 3-5 minutes apart, and while mild I was having to pause and concentrate to get through them. This had me a bit concerned and I messaged my midwife. She thought perhaps I overdid things with inventory, or even was coming down with a stomach bug that had been circulating. She recommended I either drink a glass of wine, take some benadryl, or drink some coconut water ( in case I was dehydrated) and see if i could get them to stop. I had used the first two methods before, and didn’t really care to be groggy, or have wine in m system; just in case I were to need further intervention ( sometimes being an over-thinker pays off). With the children asleep I sent my husband to the store to get coconut water around 9:30 pm.

While trying to relax on my side I felt the sudden and familiar sensation of fluid rushing down my legs. Having passed clots before I knew I must get to the bathroom as to not ruin my sheets (and wake the sleeping toddler within them to change them). As I stepped quickly in the dark I was able to glance at the floor as I reached the light of our master bathroom. It was odd, I didn’t see the splatters of red blood on the floor that I had become accustomed to with this pregnancy, the splatter was, clear. Wait, what? No, that’s not right. I passed an apricot sized clot ( which was later realized to be a piece of placenta) and some more clear fluid with brown flecks. Well crap, I thought, I think my water broke.
I contacted my midwife again and she agreed to come over and examine me. I texted my husband who rushed back home without my coconut water.

Everyone was pretty calm considering, and my midwife found me to be approx 1cm dilated. Litmus paper showed that it was amniotic fluid, but my midwife assured me it was most likely a small tear. We were able to call ahead to Winchester Medical Center, the closest local hospital with a level 3 NICU. No one really thought we would have a baby in less than 6 hours, we were just being overly cautious. My midwife drove me to Winchester while my husband waited for my parents to come stay with the kids. He would join me there as soon as he could. I remember my midwife saying something about not having the baby in the car on the way. I wasn’t sure how to take it. I couldn’t tell if it was a joke or not, I’m not sure if she knew either. I was still in a bit of shock that I was on the way to the hospital at 25 weeks, breathing through contractions that were coming 4 minutes apart.

Check in was quick and seamless and I was immediately taken to triage. I was terrified to be in a hospital filled with nurses and OBs I had never even met. The on-call OB I met first was stern but surprisingly accommodating in ways I wasn’t expecting. I was still 1-2cm, and they were unclear if I was leaking fluid or not. The nurse made a comment about meconium (due to the brown flecks) but we then realized I was too early for that to be true. They did a swab for group B strep and recommend I start IV antibiotics, and while I initially balked at that idea, I am now so grateful she talked me into it. I was send to L & D and hooked up to a magnesium drip. I’m pretty sure everyone thought my labor would subside, the tear in my amniotic sac would close, and I would be on strict bedrest for the remainder of the pregnancy. I was given my first steroid shot. My husband arrived and my midwife headed home. She said to call her if anything changed and she would come back down. This was around 12am.

As labor progressed I had a chance to speak to the OB about my options “just in case”. I was allowed to birth vaginally as long as the baby was not in distress, which was a pleasant surprise to say the least. She touted the beneficial bacteria newborns get in the birth canal, and said vaginal delivery is usually less stressful – even for preemies. The magnesium was awful, I was burning up and needed cold towels all over. I was hooked to IVs, and surprisingly lethargic. This wasn’t a labor I could own, it wasn’t a labor I wanted to own. I wanted off this ride, and all I could do was turn and grab the bars through each contraction. There wasn’t a lot of traffic in the room, my nurse was amazingly sweet, and no one pressured me to get extra drugs or an epidural. At one point I did request one, but my nurse explained it would be too much for such a tiny preemie. I didn’t feel like a labor warrior, I just wanted to forget it was even happening. By 1am I was telling nurses the contractions were stronger and I thought I was in active labor. I was checked at a 3 and left alone. I texted my midwife, and she said if I progressed further she would come back, as she had just gotten back home to Shepherdstown. Sometime between 1 and 2 I remarked that the contractions were double and triple peaking. I wanted an update and felt no one was taking me seriously. I was at a 5, and my midwife agreed to head back in the middle of the night. I asked the OB tearfully if this meant I was really having a baby, and she said it looked that way. She said someone from the NICU team would be in to talk to me about my options. At that point labor was in full force and I was nearing transition. Dr.Lee (who is the most wonderful neonatologist, by the way) came in to talk to me about the NICU. I have no idea what he said, as the entire time I was just wishing he would shut up because I was having back to back contractions. All at once I felt the baby drop – like a literal thunk and I knew he was in my birth canal. I called for the nurses and said I was feeling pressure and I thought the baby was coming. I was checked at a 7 and they began to round up delivery personnel. The OB I met in triage was in another delivery so I had a new OB I had never met. I started pushing, not on purpose, my body was expelling the baby all on its own. I’m expressing this to the staff and they still don’t seem to believe me. A quick check and “oh yes, the head’s right there”. Well yes, I did say that. One and a half gentle pushes later and they barely got the tarp under me in time. No coaching, no stirrups, just me laying on my side – still white knuckling those bedrails. I saw him for a brief moment before they scooped him up and took him away. He was tiny and blue, and had dark brown hair. He made the tiniest little squawk while he laid there. And then it was over. He was intubated and stabilized by the NICU team. My midwife came in right after the action was over, she was able to see him in person and take a few photos for me before they took him away.

The started a bag of pitocin because I’ve had a history of bleeds with prior deliveries. The midwife offered to call my doula Bergen (I didn’t even think of it to be honest) and I agreed (although I wasn’t sure why I would need one). My placenta was delivered and we got some good insight into what had happened. My side of the placenta was falling apart. That’s what those flecks were in my amniotic fluid. I also came back positive for group B strep. The theory is that group B was able to infiltrate the placenta due to the SCH which was partially over my cervix. I was not in labor long enough for my second steroid shot.

Oliver Garnet Fritz was born at 3:31am. As the pitocin induced afterpains started to feel like second labor, my doula arrived. A nurse offered pain medication for the contractions she quickly answered yes for me, LOL. I think I needed to be numb for a little while, and she knew it. They transferred me to my room, where I ate honey sticks and waited to be able to go see my baby. All 1lb 9oz. of him. Bergen helped me get acquainted with my meddle pump, and kept me company while I was still in a bit of shock from the evening’s events. I’m so happy to say that his on his first birthday, he is still here with us, at at “massive” 13lbs 2oz. 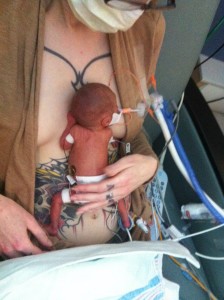